Dysphagia, or difficulty in swallowing, is prevalent among the elderly, affecting as many as 20-40% of persons between 50-80 years of age. As many as 50% of stroke patients develop some degree of dysphagia. Symptoms can include coughing during or after swallowing, choking on food or liquid, the sensation of food getting stuck in the throat, pain during swallowing and shortness of breath while eating.

Dysphagia occurs when there is a problem with the swallowing process anywhere from the mouth to the stomach. It commonly occurs following stroke, radiation therapy for head and neck cancer, traumatic head or spinal cord injury, tracheotomy, burns and meningitis. It is also common in people with congenital or degenerative neurological diseases, such as Parkinson’s disease, Multiple Sclerosis, Cerebral Palsy and Chronic Obstructive Pulmonary Disease.

Sufferers can show the following signs and symptoms:

What are the Complications of Dysphagia?

Dysphagia can have devastating complications such as aspiration pneumonia, which is caused by food or saliva going down the wind pipe and into the lungs. Aspiration pneumonia is a very serious condition and one of the leading causes of death among the elderly. Dysphagia can also predispose patients to complications such as choking and bronchospasm as well as chronic malnutrition and life threatening dehydration, muscle wasting, physical debilitation, and asphyxia. Dysphagia profoundly affects quality of life. Many patients with dysphagia end up with a feeding tube because they are not able to take in any kind of nutrition or fluids on their own. Patients with feeding tubes often experience personal discomfort and a drastic reduction in activity due to the inconvenience and pain. The loss of swallowing can also lead to severe depression due to interruption of patients’ normal ways of life.

How is dysphagia diagnosed?

Physicians and speech-language pathologists who diagnose and treat swallowing disorders use a variety of tests that allow them to look at the different parts of the swallowing mechanism.

How is Dysphagia Currently Treated?

Until recently, dysphagia was treated with conventional speech therapy and oral exercises, thermal therapy, patient education, swallowing maneuvers and physiologic exercises. In many cases, a change of diet and food preparation was recommended to improve safety of swallowing.

Is There a New Effective Treatment?

Yes, there is. VitalStim® is a therapy solution founded in 1997 by Marcy Freed (USA), a Speech Language Pathologist. VitalStim® Therapy is an innovative medical breakthrough used in the management and treatment of swallowing disorders. A non-invasive approach, VitalStim® uses a specialised form of neuromuscular electrical stimulation (NMES) designed to treat dysphagia through muscle re-education. The small, carefully calibrated current is delivered by specially designed electrodes which are placed on the neck (or jaw).

The current stimulates motor nerves in the throat (or face) while the patient practises swallowing exercises that cause the swallowing muscles to contract. With repeated therapy, muscles are re-educated and the quality of the swallowing function improves. NMES has a long record of success in many areas of rehabilitation and has been used for years by physiotherapists to treat larger muscles such as those in the legs, arms and shoulders. VitalStim® equipment is the only one of its kind approved by the FDA (Food and Drug Administration), in the USA and the European Medical Devices Directive. 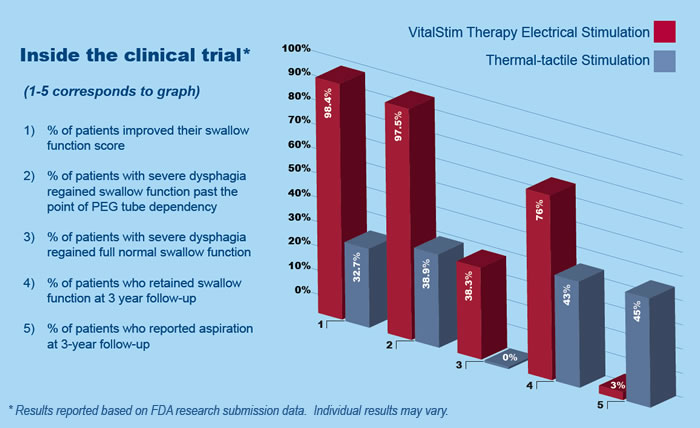 The impact of VitalStim® Therapy

VitalStim® Therapy is being used in rehabilitation hospitals, acute care facilities and freestanding clinics worldwide. In these facilities, it is helping speech-Language pathologists (SLP’s) retrain a large percentage of patients to swallow. Successful VitalStim® Therapy is getting patients off PEG tubes or thickened liquids and back to the joys of eating. When conventional dysphagia therapy is administered there is very little change over a period of several months. With VitalStim® Therapy, results are seen in 10 to 12 sessions. Some patients have been able to leave the hospital eating food and drinking liquids after as little as five VitalStim® Therapy sessions.

With VitalStim® Therapy, SLP’s are witness to wonderful quality of life outcomes that would not have been possible otherwise. This has brought about a major change in the manner in which speech-Language pathologists treat swallowing disorders. SLP’s now offer patients hope. The VitalStim® Therapy treatment program has been proven to be a safe application of electrical stimulation. To date, an estimated 1.5 million applications by over 7,000 SLP’s and physicians have not resulted in any adverse effect. The cost of the VitalStim® Therapy equipment is small compared to the savings it can generate. Cost/benefit analysis reveals that VitalStim® Therapy is a cost effective alternative to other forms of dysphagia therapies.

It is usual for these patients to return to near normal or normal swallowing function before they progress to the point where they need a feeding tube. The cost expenditure of a stroke victim suffering with dysphagia may be increased by as much as $20,000 annually. (According to Medicare Standard Analytic Results.)