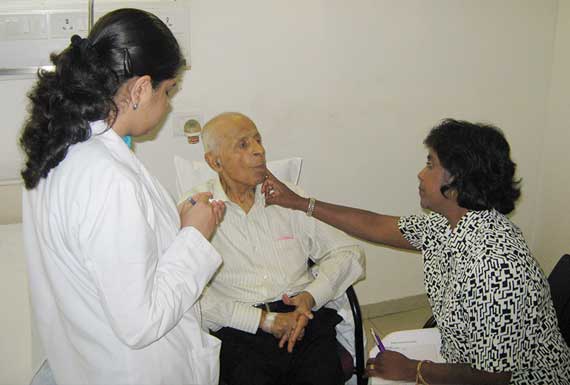 Taking into account that Dysphagia affects a wide spectrum of our population, VITALSTIM UK set out with the following aims:

Sumathi Sinnappan is a Consultant Speech Language Therapist / Pathologist for VitalStim UK Ltd. She graduated and completed her B.Sc in Audiology and Speech Science in 1993 at the pioneer Institute in India – ‘All India Institute of Speech and Hearing’ (AIISH), Asia’s first research institute. She achieved first position in the Speech Pathology clinical performance during her under graduation.

On her return home to Malaysia, she was one among the six Speech and Language Pathologists and one among the three Audiologists in the country offering the clinical service to 22 million people. Due to the shortage of such professionals in the country, each clinician was under a lot of pressure having to treat many patients. This has provided her immense opportunities to utilize her clinical skills extensively across all types of pathological conditions and age group.

Ms Sinnappan has about 16 years of working experience in her field. Her first job gave her good head start to her profession. She was involved in a pilot project in Selangor state, based on the ‘World Health Organization’ concept in a Community Based Rehabilitation Centre, in Malaysia. This project had provided her great opportunity and exposure to work closely with her senior fellow colleagues who included Speech Language Pathologists, Occupational Therapists, Physiotherapists, Psychologists and Social Workers across the globe.

Ms Sinnappan then worked as a Speech Language Pathologist in the ‘Kiwanis Downs Syndrome Foundation’, Kuala Lumpur, Malaysia. The ‘National University of Malaysia’ then started its first undergraduate programme in Speech Pathology and Audiology. She started as a clinician and clinical educator in the Allied Health Science faculty.

Along side this; she also had her own private practice. She then became a part time Speech Pathology Consultant to ‘Damansara Specialist Hospital’, ‘Selangor Medical Centre’ and ‘National Stroke Association of Malaysia’.

She trained as a VitalStim Provider in Hong Kong in 2005 by Marcy Freed from America, (the founder of VitalStim therapy). She has been practicing since then. She then joined ‘Mei Health Care’ as a senior Consultant and spearheaded the setting up of the Speech Therapy division in the company for the capital city, Kuala Lumpur and Petaling Jaya, a satellite town in Malaysia.

She has great passion for her field and has taken up the mission to spread this new treatment in the U.K. Her goal is to get more Dysphagia specialists and Speech Language Therapist to help the 1.6 million British sufferers.

This will improve people’s quality of life and could potentially reduce long term health care costs.

She has also had significant roles in several other organizations such as: